Andrew, this isn’t a complete response to your situation. I’ll just handle your main question. Then, if you need clarification, we can get the fundamentals right before tackling other issues. So, here’s my response to “do we know of a list of potential triggers?”

List of triggers for gout attack:
1. The immune system sees too many uric acid crystals than it can handle, so it sends out signals for reinforcements (more white blood cells needed).

There is only one trigger for a gout attack. Creating white blood cells is a painful process for most people. White blood cells are very good, but they can’t kill inanimate invaders like uric acid crystals. They engulf the crystals, which hides them from our immune system, so inflammation slowly stops.

So, another question is: what triggers uric acid crystals to become visible to our immune system? That’s a list of 2:

1. New crystals grow. This can’t happen if your uric acid is 4.9mg/dL. So, we’ll forget it, unless you are exposed to prolonged intense cold. Uric acid crystallizes easier at lower temperatures.

You absolutely need old crystals to dissolve. That is the only way to recover from years of excess uric acid. Everything we do to control gout has to involve lowering uric acid below the crystallization point. That has consequences. Just like recovering from a toothache, there’s a process that’s probably going to hurt. That’s why good doctors warn you that lowering uric acid can trigger a gout attack. Good doctors prepare you with gout pain therapy for as long as you need it. 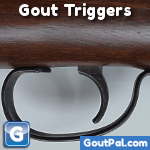 What are your gout triggers?

As old crystals dissolve, they shed the coating that hid them from our immune system. Often, this goes unnoticed. Sometimes, there are enough partially dissolved uric acid crystals to trigger a gout attack. That’s why we need gout pain therapy until most of the old crystals have dissolved.

Is there a bullet in the gun?

[gravityform id=1]
Please note that I may post information from the Helpdesk in the gout forums.
I will never reveal your email address to anyone else.
© 2010-2022 Keith Taylor.
[Home] | [About] | [Purpose] | [Contact] | [Privacy] | [T&Cs] | [Notifications] | [Search]
Disclaimer: I publish GoutPal.net to allow gout sufferers to discuss their questions, experiences, and opinions. So these are personal views. But this is definitely NOT a substitute for professional advice.