Sorry for arriving late, d_q. I thought this was just a general chat and I was waiting for some spare time. Anyway, I’ve changed the title and moved it here from General Discussion.

I’m concerned about a few points. But, I need to go more research on hemoglobin and gout before I can say much meaningful. In particular, I’m in the dark about what constitutes a safe hemoglobin level. Because I’ve been bitten badly by normal values related to uric acid.

I can see that male values should normally be between 130 and 180 g/L. But, safe levels are harder to determine. So far, I’ve seen one report that suggests 120 is not a real concern. In the hemoglobin and allopurinol report, the data shows higher levels than that. Also, hemoglobin appears to rise again after 3 months. 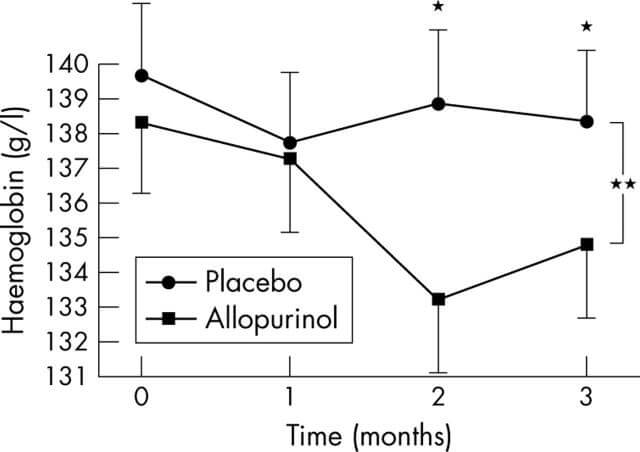 What level of hemoglobin is safe?

So question one is: is your hemoglobin a real issue? Or a temporary blip?
I.e. what hemoglobin history have you got?
Obviously, if you are in danger of anemia, you have to take action. But, I’m concerned that if this is only a short-term issue, with little consequence, you risk throwing out the baby with the bathwater.

As for Adenuric, I also can’t locate 40mg in England. But, I saw a hint that Scotland has it (so far unconfirmed). The main problem reported with febuxostat relates to liver problems. But, if you get liver function tests, alongside uric acid tests, it is quite easy to monitor this.