How long does “mild gout” last?

Firstly, I am a complete newbie to this gout game and have researched the web high and low since having my first attack earlier this year. I have to say that I personally feel that this site is the best out there and am so glad I found it!!

My “Gout” life started back in early July this year (2010). I play (well used to before my gout attack!) 7-a-side football once a week. I played on the usual Tuesday night and everything seemed fine (I do get a few twinges/bruises every time I play) but on the following Friday morning I woke up, stepped out of bed and my big-toe on my right foot hurt when I walked on it. Strange I thought but must be “football” related – How wrong I was…….

I gave it a week (missed playing football and haven’t actually been able to play again since) and then went to see my Doctor. The first doctor I saw said it was a “hairline fracture” and to rest it. Off I went.

3 weeks passed and it was still no better. Well to be truthful, it seemed to be “ok” one day then go back again the next?? It if was a bone healing then why would it “keep” going backward every other day? Back to my Doctor, I went.

My Doctor sent me for an X-ray at a hospital. Waited a week and called them up. It looks like a “dislocation” I was told and to come back to get it “fixed”. Went back to the hospital. Oppps, they had made a mistake and looked at my X-ray incorrectly??? They tried to say all of my other toes were “bent” so they were dislocated. Basically, at my X-ray, they had told me to “bend” my other toes so they could get a clear picture of my big toe. So they took another X-ray at the hospital and they said it was definitely not a fracture or a dislocation.

Off I went with a special boot they gave me to walk on and the Doctor at the hospital put it down to “bad internal bruising” and to just be patient.

3 weeks passed. Still no better. This is getting silly now. After looking at advice on the internet after Google “Bad big toe” I came across someone saying the word GOUT. I didn’t even know what this was?? [hint: See What Is Gout.]

Anyway, after looking into further and also viewing images of Gout on the big-toe/foot, I realized that it was exactly the same as mine. So I went back to my Doctors and demanded to see another GP. This new GP confirmed it looked like Gout but I didn’t fit the “profile” of a candidate for it (I turned 30 years old in July and this is around the exact time I got this first attack). I rarely drink (although I binge drink once every 2/3 months). I eat healthy foods, exercise, and drink loads and load and loads of water!! I told my doctor it could be hereditary. He agreed it could be but sent me for a blood test. I was also given Dicloflex 50mg tablets (3 a day).

I also ordered 3 x bottles of CherryActive concentrate juice and have been drinking 2 x tablespoons a day since. It is also worth saying that my left knee had now also swollen and my 2nd biggest toe on my right foot had also swollen.

10 days later and my results were in. “Normal” I was told. I still wanted to discuss with my GP as my foot was still not right. 4 days later (after being on Diclofex for 2 weeks) I saw my GP again who had sent me for my blood test. Although it was “normal” I was 4.1. My doctor said if it was 4.2 I was it “Gout” territory. As I was still having “symptoms” my Uric Acid level could be artificially low as my body had “dumped” some in my swollen joints. It is Gout.

My Doctor said he can put me on Allopurinol but wants me to be “clear” of gout symptoms. Bearing in mind my first “attack” started on around the start of July. It’s been around 3 months now (really, really making me down, to tell the truth as it has just come out of the blue and not being able to walk without a limp is driving me nuts).

Anyway, to get me “clear” of the symptoms he told me to stop the Dicloflex and have a weeks course of Prednisone. I am on day 3 of a weeks course and although the swelling seems to have gone down (my right knee seems fine now and has been for a while anyway) it still hurts to walk properly and my right shoe/trainer still feels very tight.

Anway, after my long-winded story of my Gout, my questions are these:

1) Is it normal to have a “mild” gout attack linger for over 3 months??

2) Should the Prednisone not work by now?? (understand that it does not dissolve the crystals but helps with the pain reduction and rids of the basic symptoms which my doctor wants in order to be able to put me on the Allopurinol).

3) Will the Allopurinol work and, if it does, will my symptoms disappear completely forever ( I hope I have not got any permanent damage in the affected joints)?

So far my prolonged attack has been mild and when I sit down and am off my feet I wouldn’t even notice it was there. But gout hurts when I walk and I just really want to get back to normal again. 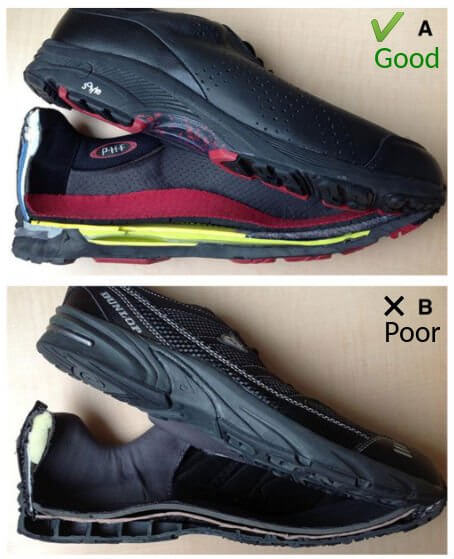 Will gout pain go away quicker with better walking shoes?