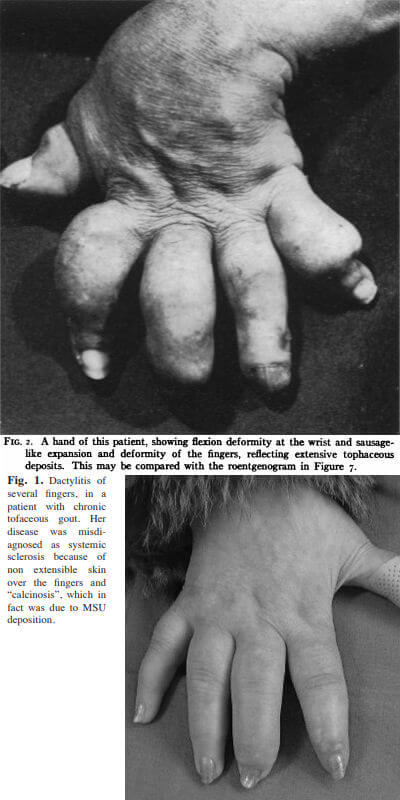 Gout with “sausage-finger” photos is my featured image for Sausage fingers and gout medicine reactions.

The top photograph is from:
Lichtenstein, Louis, H. Wayne Scott, and Melvin H. Levin. “Pathologic changes in gout: survey of eleven necropsied cases.” The American journal of pathology 32, no. 5 (1956): 871.

The caption for that photograph reads:

FIG. 2. A hand of this patient, showing flexion deformity at the wrist and sausagelike expansion and deformity of the fingers, reflecting extensive tophaceous deposits. This may be compared with the roentgenogram in Figure 7.

However, I have not included the corresponding x-ray (roentgenogram) referred to as Figure 7.

The caption for that photograph reads:

Fig. 1. Dactylitis of several fingers, in a patient with chronic tophaceous gout. Her disease was misdiagnosed as systemic sclerosis because of non-extensible skin over the fingers and “calcinosis”, which in fact was due to MSU [uric acid crystal] deposition.